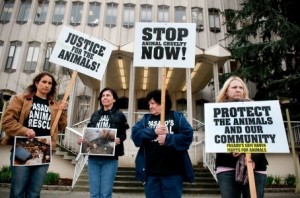 A Voice for the Voiceless

It seems like regardless of where you work, the concept of eating meat or a situation where meat is involved or somehow brought up, is common. And although as animal advocates, we do more good than harm for these animals; yet we still find a way to be treated as if we are confused about our morals or question why we would ever not “eat meat!”

Times like these are so difficult. When we are doing all we can in a world that is defeating our efforts, being knocked down or discouraged is simple. But, we must at least pretend for the sake of ourselves and play along; we must know how to take control of the situation and use it to best benefit what we stand for. Making ourselves an easy target for defeat only shows us to be weak and in this case, unintelligent. Honestly, the best way to approach someone who questions your standpoint on eating meat or advocating for animals, tell them the truth in an honest, sincere, and confident way. The last thing you want to do is appear powerless and nervous. You are their voice, so be it!

When you are a voice for the voiceless, you must echo their voice in a way that resembles them, not you. This is crucial to their voice being heard and actually having an impact. If you speak with disgust, hatred, or uncertainty, surely you won’t make the point you were wishing to make. Trust me on this one, your tone of voice and attitude really do make a difference in the way people respond.

And though reacting in such a presentable way is such an important thing, it’s definitely not the easiest. In fact, as a result of disbelief, disgust, and lack of hope, it’s almost crazy to think of acting in this way.

Just remember, “In a gentle way, you can shake the world” (Ghandi).

Keep your head up; because the second you let it down, you’re letting the animals down, too.