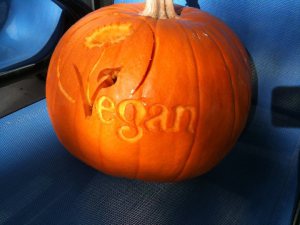 First off, Happy Halloween to those who celebrate! Instead of just collecting any candy, maybe it’s time we consider those who suffered for that candy. Who can fully enjoy Halloween knowing an animal was hurt in the process of that delicious candy bar? Besides, why would any animal need to suffer when there are vegan candy options!

For costumes why not dress up as a slaughterhouse worker, Ronald McDonald, or a fur hag and put your activism to work. That way, you have a great reason to inform others of the cruelty animals face and leave a lasting impression. Mercy For Animals has some great ideas for costumes that play the part, not the act! You can find them here. With that being said, even if you don’t get dressed up, you can always resort to your default: animal activist! That way, animals are not only being spoken up for, but you can help raise awareness when someone asks about being an animal activist. Better yet, why not tell them why, up front? That’s change in the making! How about raising eyebrows and awareness at the same time?

Now, back to candy. Yes, there are vegan candies besides those specialty candies you buy from a health foods store. PETA2 also has a great list of vegan halloween candy to pass out to “trick or treaters.”  The easiest way to be kind to animals this Halloween is watch out for gelatin, egg and milk candies. Better yet, don’t support them at all and provide “trick or treaters” vegan candy and why not include a note that informs them that ‘no animals were harmed in the making!’ Some common favorites include:

For even more vegan candy, check out VegNews’ list or buy specialty vegan candy at Vegan Essentials or other great vegan stores like Vegan Cuts. Or better yet, make your own candy at home! So why not have yourself a vegan treat and allow others to explore vegan goodies, too! This Halloween, hand out a treat, not a trick to eat a corpse! Remember to keep safe and check your ingredients! Happy Halloween and remember black cats need our love, too!

P.S. Candy corn is not vegan! It contains gelatin.