Warning: "continue" targeting switch is equivalent to "break". Did you mean to use "continue 2"? in /home/empamal4/public_html/wp-content/plugins/seo-ultimate/modules/class.su-module.php on line 1195
 The Unfair Gender Generalizations of Not Eating Meat 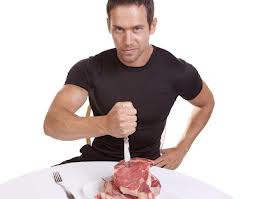 The Unfair Gender Generalizations of Not Eating Meat

Let’s stop and think about this for a minute. Has it ever occurred to you that most of the vegetarian or vegan population is made up of females? Now I know some of you will disagree and say that you can’t find one veg female in your area but for a majority of us, this statistic holds true in what we see in our daily lives. Besides the fact that we don’t run into vegetarians or vegans that often, well at least in my town, being a male vegan or vegetarian seems to be almost, dare I say, rare?

According to Vegetarian Times, “59 percent are female; 41 percent are male.” And though this data seems to being portrayed as nearly half female and half male, keep in mind that this data was surveyed in 2008 by 11.9 million people!By all means, I am not looking down upon males for their concern for animals, their health and the environment, rather I am applauding you and wishing your compassion would spread towards other men, too! What I want to explore is why culturally or biologically there could possibly be more female than male vegetarians, today.

Off the bat, most people would think of a male vegetarian as unmanly or too sensitive, while others would look up to this and see compassion and a clear conscious. Then again, what’s wrong with being sensitive and actually caring about the life of another being? Does our society think this way because of man’s prehistoric biology of being hunters or is it really our culture’s expectations that are being favored?

And while men have been developed with hunting in their genes, women have been developed with the need to nurture and bear a child. Is this why it seems more women have empathy towards the treatment of animals; the fact that they feel for not only the animal, but the mother’s of these helpless beings? Or, is it that because of a man’s biological need of more calories due to more muscle tone and larger organs that makes him less likely to even consider vegetarianism, even for his health? Or maybe it’s society’s pressures on men to be dominant, more aggressive and strong; maybe it’s even a mixture of societal and biological reasonings. What ever it may be, who’s to say a man can’t live a healthy, calorie-filled life without eating meat? Why is that when we hear of a man being vegetarian we immediately question his manhood as opposed to a woman, where we immediately assume it’s because she’s sensitive?

But let’s face it, either way society looks at vegetarians or vegans, they will question simply because of their cultural norms or habits and for what it seems, apathy for other beings. The same thought holds true when we consider the male vs. female veg population and how society has placed specific differences with their name to prove their genetic makeup.

Biologically speaking, studies have shown that males have a larger amygdala, “a structure in the temporal lobe that has long been known to play a key role in emotional responses and emotional memory in both humans and nonhuman animals.” In fact, “psychological studies have identified a variety of sex differences in emotion-related behavior in humans. For example, women on average retain stronger and more vivid memories for emotional events than men”(Seidlitz and Diener 1998; Canli and others 2002).

With that being said, is it possible that men actually are less emotional than women, regardless of the topic? Yes, it is. But is it the only role that tells men how to emotionally react? Of course not!

Society plays another role in this, as we know. And besides biology, it seems expectations from those around us also tend to shape the way we not only act, but eat.

We’re all aware of how the media has portrayed women into being a perfect barbie doll; in return, females in our society try to fit that image. But it’s not only for women; strong bodies, strength, and independence are greatly portrayed in what we call ideal, for men. In return, it seems our culture has developed ways to live up to the media’s ideal attributes. For example, extreme diet watch for women and extreme body building for men. Does this have something to do with the fact why more women are leaning towards vegetarianism as opposed to men? Possibly, but if so, why do men not see these health benefits like women do? Has our society really been that naïve into thinking that no meat equals no calories?

Vegetables, fruits, grains, and legumes are all rich in nutrients, this is not surprise. In fact, many vegetarian or vegan body builders know this, which in return completely transforms their body and puts their hard work into good hands, without the use of steroids or meat. So why do so many men, it seems, fall back on meat for protein to bulk up? It’s understandable to want a complete amino acid profile but technically speaking, there are other ways to do this that eliminate other health related diseases, and animal abuse, as well.

So the question is, where do we draw the line? Why does not eating meat make another question a man’s masculinity as opposed to questioning a female’s femininity? It is really all biology based or are the expectations our culture has placed upon men, influence what a man distinguishes himself from a female?

Truth is, there’s nothing manly about being uneducated vs. being educated! But, we can’t blame men for society itself has allowed women to be more empathetic than men. And regardless or whether this is socially acceptable, isn’t it time we put our best foot forward and change not only our own ways, but help shape society’s? Besides, isn’t it manlier to rebel, challenge, and question what others are doing than to conform and follow the rest of the crowd?

In a way, a man choosing to wear pink is almost like a man choosing to not eat meat. Why? Because society has associated certain characteristics in which they subordinate with masculinity and femininity.  Specifically in this case, wearing pink is associated with femininity and eating meat (biologically — hunting as opposed to gathering) is associated to masculinity. But clearly, our perceptions of male and female have been skewed in our society.

What’s wrong with a man who decides to wear pink or a man who decides to not eat meat? Nothing! It’s time we challenge society’s expectations and norms and step out of our comfort zones. Instead of being on the inside all the time, it’s time we take a step back and look in from the outside. Doing something because it’s always been done doesn’t make it moral or rational. Choosing to not wear or eat something because it’s ideal or common doesn’t make it wrong. It makes you more than human. A living, feeling being who is perfectly okay with making decisions that can potentially better ourselves and our planet.

In the end, we must realize that it’s our own will power that determines our lives, not society’s; unless we choose it to be that way. After all, wouldn’t doing something others don’t have the strength or dedication to do make you stronger?

Wrong is wrong even if everyone is doing it. Right is right even if only you are doing it.

Kudos to all you men out there who stick to their guns and do a great job doing so! Us female vegetarians love you, oh, and animals, too!

I strongly encourage male AND female thoughts below! Also, don’t forget to check out these great videos on the “manliness” of eating meat!