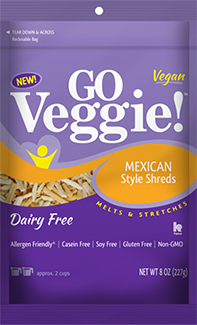 There’s good news for the vegan community: GO Veggie! is no longer here to trick us anymore; they now have vegan products! If you’re like me, you’ve run into GO Veggie! at your grocery store and saw the words “lactose free” on the package of a company called “GO Veggie!;” the message seemed clear, until the ingredients suggested otherwise. Their products weren’t vegan as they still contained casein as the second ingredient! And if you’re not careful, maybe you slipped that what you thought was vegan cheese, into your cart and later into your mouth! Yikes…

Luckily, GO Veggie! has finally came to their senses and is available in vegan options; they are now clearly labeled “vegan” and “dairy free” on the front package.

Being the curious person I am, I gave GO Veggie! a second chance; as I wasn’t pleased with what I bought the first round. Besides, what interested me the most the first time was the price!

Luckily, I must say, the vegan “cheese” shreds do get rid of those cheese cravings. Though, it depends what your idea of “cheese” tastes like in the first place. Personally, the taste was too much for me. ‘Too much?’ It’s true! Though these vegan “cheese” shreds are better for you than real cheese and obviously guilt-free, the taste itself was extremely rich and almost made me feel guilty.

Though it did melt faster than real cheese, I must say I was impressed but not impressed at the same time. The best way to describe my feelings with GO Veggie! products overall is love-hate.

The “cheese” shreds I tried was Mexican Style, so maybe that has something to do with the way they tasted but I couldn’t imagine that being so. To me, they tasted buttery and fattening, not clean, like I would have expected. If you’re into a richer tasting “cheese” than I recommended you give them a try; though I can’t speak for every product or style of cheese they have. For $2.99, you can’t go wrong with putting them on pasta or to sprinkle on dishes. I wouldn’t recommend making quesadillas or grilled “cheese” with them though; without a taste test, first. Who knows? Maybe you’ll fall in love, or maybe you’ll feel the same as me.

All in all, it all comes down to preference and as long as no one is harmed in the making, who cares what you preference is as long as it’s good for your health, and your taste buds!?

If you’re interested, you can check out GO Veggie’s! dairy-free “cheeses” here. They also have grated toppings, blocks, cream cheese, and slices along with shreds.